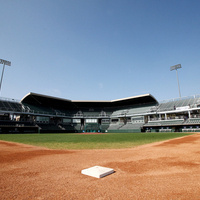 Opened in 2003, Lupton Stadium is considered one of the premier baseball facilities in collegiate baseball; Lupton Stadium was expanded in 2016 to include players and coaches locker rooms, lounge areas, team rooms and offices. The facility allows every seat to be extremely close to the playing surface for a great vantage point of all the exciting on-field action. With its Williams-Reilly Field, the ballpark is built to Triple-A Minor League standards and is among the best ballparks in the Fort Worth-Dallas area. The stadium is named for the late Charles A. and Marie Lupton, who owned the Fort Worth Coca-Cola bottling franchise and bottling plants in Texas and California. The Brown-Lupton Foundation made the naming gift.