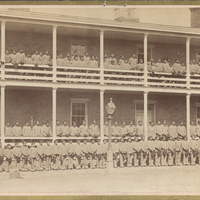 A Frank Discussion about American Indian Boarding Schools, Christianity, and Their Legacies

Recent discoveries of over 1,000 unmarked graves of Indigenous children at Canada’s former residential schools and the subsequent pledge by the U.S. Interior Department to investigate former federal Indian boarding schools have brought to the forefront long-ignored questions regarding the roles played by American governments, educational institutions, and Christianity in the genocide of Indigenous peoples. Sadly, U.S. and state governments and Christian denominations used boarding and other schools as a primary weapon to destroy American Indian peoples, societies, and cultures. Their devastation continues to impact Native communities today. This panel, led by three American Indian leaders, will address the legacies of Christianity and the boarding schools, and how healing in American Indian communities can be supported and reform brought to Christianity and the historical narrative of the development of the U.S. We will also explore the implications of these legacies for TCU.

Chebon Kernell (Seminole) is a leader of a Muscogee/Creek ceremonial grounds and Executive Director, Native American Comprehensive Plan, The United Methodist Church. He is a member of TCU's Native American Advisory Circle.

Jodi Voice Yellowfish (Muscogee/Creek, Oglala Lakota, and Cherokee) is Chair of MMIW TX Rematriate (Missing and Murdered Indigenous Women), a board member for Dallas Truth, Racial Healing, and Transformation, and organizes with Our City Our Future.

Annette Anderson (Chickasaw and Cherokee) is a Licensed Clinical Social Worker and a member of the Council for the Indigenous Institute of the Americas, located in Plano, TX. She is a member of TCU's Native American Advisory Circle.