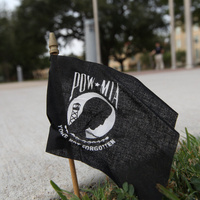 Ahead of National POW/MIA Recognition Day (September 17), members of TCU Air Force ROTC participate in a 24-hour exercise to recognize those military personnel listed as POW/MIA, their families and the efforts to bring them home.

National POW/MIA Recognition Day is a day to remember POW/MIAs and America’s responsibility to do everything in its power to account for those who are missing or captive. Ceremonies are held from coast to coast and around the world at military installations, national veteran/civic organizations, ships at sea, state capitols, schools, churches, police departments, fire departments, fire stations, etc.

National POW/MIA Recognition Day is a day of commemoration for servicemen unaccounted for and/or missing in America’s wars. The first commemoration of this day was held July 18, 1979 at the National Cathedral in Washington, D.C. The date was chosen because it was around the time the League had its yearly meeting. On that day the 1st Tactical Squadron from the Langley Air Force Base in Virginia flew the Missing Man Formation, and the Veterans Administration made posters. These posters contained only the POW/MIA acronym, which was the standard poster format until 1982. To show the urgency of the situation (recovering POW/MIAs from the Vietnam War), the poster symbol was changed to include a black and white image of a prisoner of war in distressing circumstances, the same symbol used on the POW/MIA flag.