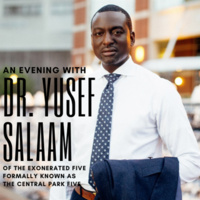 An Evening with Dr. Yusef Saalam

As an exonerated African-American man and an influential transformational speaker, Yusef has traveled all around the United States and the Caribbean to deliver influential lectures and facilitate insightful conversations as he continues to touch lives and raise important questions about race and class, the failings of our criminal justice system, legal protections for vulnerable juveniles, and fundamental human rights.

Since his release more than 20 years ago, Yusef has become a family man, father, poet, activist, and inspirational speaker. He has committed himself to advocate and educate people on the issues of mass incarceration, police brutality and misconduct, false confessions, press ethics and bias, race and law, and the disparities in America’s criminal justice system, especially for young men of color.