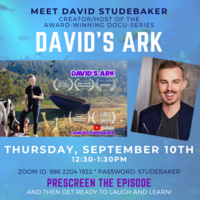 Documentary screening and Q&A with David Studebaker, comedian and host of “David’s Ark”

How can a stand-up comedian help save animals? David Studebaker, named “One of the 10 Best Comics to Watch,” set out to find the answer. As the creator and host of the YouTube documentary series David’s Ark, he shares some of the challenges animals face and highlights the people and organizations that are fighting to protect them.

In this event David will give some background on the series and the animal advocates he works with. Then attendees will get the chance to ask him questions about animals, animal carers, comedy, and anything else on their minds.

PLEASE WATCH THIS EPISODE IN ADVANCE IF YOU CAN:
David’s Ark Episode 9, Marine Mammal Center

David Studebaker is the creator/host of the award-winning YouTube documentary series David’s Ark, for which he travels the country highlighting people and organizations who work to protect animals and the environment. He has been featured on Fox and ABC, and was the host of “Pivot on the Street” for Pivot TV’s national network. He has headlined comedy fundraiser shows for a variety of charities, and is the emcee for the Last Chance for Animals’s annual celebrity awards gala at the Beverly Hilton. In 2019 he and his wife gave birth to their first child (she did most of the work).