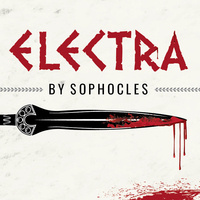 A father sacrifices a daughter to the gods before going off to war for the sake of the battle.
A wife kills her husband to avenge her daughter’s slaying and his infidelity.
A daughter has her mother killed to avenge her father’s murder.
A son kills his mother’s lover for conspiring in his father’s death.
Where murder is concerned, does revenge equal justice? When is the “blood for blood” chain complete?
Electra, by the ancient Greek playwright, Sophocles, tells a story of revenge not unlike today’s headlines.

Join us at Hip Pocket Theatre's OUTDOOR performance space in West Fort Worth for ELECTRA! Hip Pocket Theatre is a Fort Worth institution co-founded by two TCU alums, Johnny and Diane Simons. “It’s been easy to see the Hip Pocket as part-counterculture, part-Texas whimsy: a funky, distinctly Fort Worth bit of naiveté and smarts” (Art and Seek).