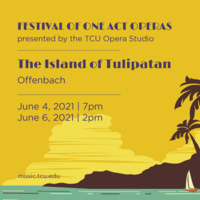 Ensemble Concert Series: Festival of One Act Operas - The Island of Tulipatan

Please join the School of Music for the Festival of One Act Operas presented by the TCU Opera Studio. All performances were recorded prior to the end of the spring semester.   David Gately, director.