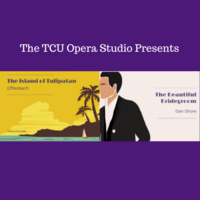 Please join the School of Music for the presentation of Offenbach: The Island of Tulipatan and Dan Shore: The Beautiful Bridegroom by the TCU Opera Studio.

This event will not be livestreamed

Music and Libretto by Dan Shore

A hilarious romp! A unique one act opera in that composer Dan Shore scored it for six sopranos! A perfect piece for the Opera Studio at TCU where this year we have a preponderance of incredibly talented Sopranos!

The widowed Terentia (Jeannie Miller), after a visit to the city to find a husband for her daughter Laruentia (Janell Stallard), decides that she herself would like to marry – not her wealthy neighbor Jeroniumus, who has made repeated offers, but rather a young man in his twenties! As she would like to keep this a secret from her two daughters Laurentia and Leonora (Olivia Flores), she charges her indignant maid, Pernille (Kathryn Piña), to keep quiet.

Leonora is trying to learn how to dance, which she hopes she will be able to do soon at a wedding for her older sister Laurentia. Laurentia herself is uninterested in getting married, which confuses the amorous Leonora. They spot an agitated Pernille, who lets slip that she is on her way to see Madam Kirsten (Marcie Duplantis) the local matchmaker. The two girls believe that she will be bringing a husband for Laurentia.

Madam Kirsten muses on her unusual assignment, and the fact that Pernille has asked her to help expose Terentia’s folly. The Matchmaker meets with Terentia and encourages her to accept her old neighbor Jeronimus as a husband, but Terentia prefers the kind of man she has seen in the city: young and beautiful. Madam Kirsten suggests the captain Frands von Frauenliebe (Maggie Williams) who is, in reality, Madame Kirsten’s young niece and who could pass for a beautiful young man! Madame Kirsten has hatched a plot!

Pernille, Laurentia, and Leonora prepare frantically for the coming visitor, unsure of how best to proceed. Kirsten enters and presents Captain von Frauenliebe, who captivates all of the ladies. To the horror of Laurentia and Leonora, the marriage is arranged between Frauenlibe and Terentia.

While Terentia exults over her coming wedding, Pernille excoriates her for not having the captain marry Laurentia instead. Madam Kirsten enters in tears: the handsome young man has mysteriously been transformed into a woman! Frauenliebe enters and bewails her fate. Terentia, humbled, agrees to marry Jeronimus. Laurentia is still mysteriously attracted to the female captain…. And perhaps it remains for Pernille to teach Leonora how to dance!