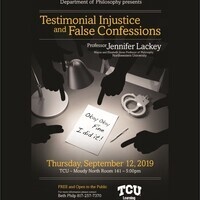 In the criminal justice system, confessions have long been considered the “gold standard” in evidence. An immediate problem arises for this gold standard, however, when the prevalence of false confessions is taken into account. Since 1989, there have been 353 post-conviction DNA exonerations in the United States, and 28% of these involved false confessions. Moreover, false confessions involve everything from minor infractions to detailed accounts of violent crimes.

In this paper, I take a close look at false confessions in connection with the phenomenon of testimonial injustice. I show that false confessions provide a unique and compelling challenge to the current conceptual tools used to understand this epistemic wrong. In particular, I argue that we cannot make sense of the unjust ways in which false confessions function in our criminal justice system by focusing exclusively on speakers getting less credibility than they deserve. I conclude that the way we conceive of testimonial injustice requires a significant expansion to include what I call agential testimonial injustice—where an unwarranted credibility excess is afforded to speakers when their epistemic agency has been denied or subverted in the obtaining of their testimony. At the same time, I show that work by legal scholars and social scientists can benefit by viewing the practices that produce confessions through the lens of this expanded notion, and hence that epistemological tools can shed light on issues with enormous moral and practical consequences.