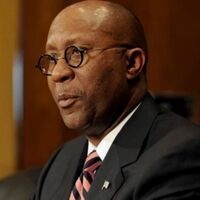 The Office of Diversity and Inclusion Presents Passing the Torch with Keynote Speaker Ron Kirk for our annual MLK Luncheon.

Ambassador Kirk draws upon more than 30 years of diverse legislative and economic experience on local, state, and federal levels. As the first African American Mayor of Dallas from 1995 – 2001, he earned a reputation for bringing together diverse coalitions to get things done. During his tenure as Mayor, Ambassador Kirk expanded Dallas’ reach to the world through a range of trade programs, including numerous trade missions. He also passed seven budgets that focused on the critical needs of the city while maintaining and even lowering taxes. His economic development efforts helped secure more than 45,000 jobs and investment of more than $3.5 billion in Dallas. To protect citizens he increased the public safety budget by $128 million, and while he was Mayor, Dallas saw its lowest crime rate in 20 years. Previously, Governor Ann Richards appointed him as Texas Secretary of State, he served as a legislative aide to U.S. Senator Lloyd Bentsen and he was named as chair of Texas’ General Service Commission. Ambassador Kirk also served as a City of Dallas assistant city attorney.

Join us as we celebrate the history and significance of Dr. Martin Luther King Jr’s legacy with Ron Kirk.

At this time, registration for the in-person luncheon is closed. However, if you would like to join us live through the webinar, please register.

If you have any questions, contact Leslie Ekpe at l.ekpe@tcu.edu.