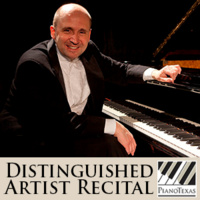 This recital is both unique and fascinating. It contains works that are often performed and seldom performed, several Texas premiers and that were composed over 100 years ago. Emile Naoumoff has been likened to both Vladimir Horowitz and Arthur Rubinstein as a pianist, displaying -- as one critic remarked -- the fire of the former and the poetry of the latter. At the age of seven, after a fateful meeting in Paris, he became the last disciple of Nadia Boulanger, who referred to him as "The gift of my old age." So the program is the filiation between Mademoiselle Boulanger who was Fauré’s disciple and Mr. Naoumoff who was the disciple of Mademoiselle Boulanger structures the program’s opening and closing with Fauré’s music. Pianotexas is grateful that Mr. Naoumoff has accepted to give the Pre-Concert Talk prior his recital. Without doubt, the evening promises to be one that will be remembered for a long time.