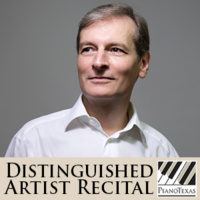 PianoTexas is proud to welcome back Philippe Bianconi. After winning the Silver Medal of the 1985 Van Cliburn International Competition, he carved out an impressive international career performing with major orchestras and in important concert halls like Carnegie Hall and Salle Gaveau. The London Times critic stated: “an extraordinary exhibition of musicianship, technical control and good taste which lent the music a freshness, immediacy and conviction one all too seldom encounters”. He recently released a Chopin recording, which joins his acclaimed discography of Debussy, Schumann, Schubert, and the complete solo works of Ravel.