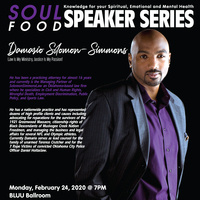 “Law is his Ministry and Justice is his Passion!” best sums up  Damario Solomon-Simmons.

Growing up in a single-mom household, struggled for years to “find himself” as a Black man in America and graduated at the bottom of his high school class and was a college dropout before becoming a University of Oklahoma football letterman, graduating with honors with his Bachelor's Degree in African & African-American Studies, Masters in Adult & Higher Education, and becoming OU College of Law's 1st African-American recipient of the Joel Jankowsky Award for most outstanding law graduate.

He has been a practicing attorney for almost 16 years and currently is the Managing Partner of SolomonSimmonsLaw an Oklahoma-based law firm where he specializes in Civil and Human Rights, Wrongful Death, Employment Discrimination, Public Policy, and Sports Law.

He has a nationwide practice and has represented dozens of high profile clients and causes including advocating for reparations for the survivors of the 1921 Greenwood Massacre, citizenship rights of Black Descendants of Muskogee Creek Nation Freedmen, and managing the business and legal affairs for several NFL and Olympic athletes. Currently, Damario serves as lead counsel for the family of unarmed Terence Crutcher and for the 7 Rape Victims of convicted Oklahoma City Police Officer Daniel Holtzclaw.

Outside of law, Damario is the co-founder and Executive Director of the MVP Foundation whose mission is to inform, inspire, and empower 8th-grade boys from single-mom households. Damario is on the Board of Visitors of OU's African-American Studies Program. Damario is also a highly sought after speaker and a frequent media guest that has been featured on such media outlets as CNN, The View, 60 Minutes, MSNBC, ESPN, The New York Times, The Root, and Roland Martin Show.

Damario is passionately in love with his high school sweetheart, wife, and business partner Mia and they live here in Tulsa where he is a member of Metropolitan Baptist Church and the Xi Omega Graduate Chapter of Omega Psi Phi Fraternity, Inc.

Individuals interested in this opportunity should RSVP for the keynote AND/OR “limited seating” post keynote Meet and Greet on our FSL Engage Event Calendar at the following link, http://bit.ly/TCUFSLEvents.