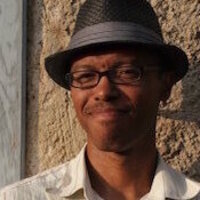 In an abundance of caution, this event has been canceled due to coronavirus concerns.

Born and raised in Compton, California, poet Amaud Jamaul Johnson was educated at Howard University and Cornell. His debut collection, Red Summer (2006), examines the infamous race riots of 1919, during which nearly a hundred African American men in cities across the country were lynched. The book won the 2004 Dorset Prize from Tupelo Press. Selecting the volume, judge Carl Phillips noted that “Johnson’s poems remind us that the human record is at last a mixed one: violence, shame, betrayal, and fear, but also joy, courage, love and, yes, hope. Red Summer gives us the stirring debut of a restorative new American voice.”

Influenced by Amiri Baraka, Audre Lorde, and Robert Hayden, Johnson’s poems combine narrative and lyric to explore the roots of violence and desire. In conversation with poet Douglas Kearney for the Boxcar Poetry Review, Johnson discussed the connection between his poetry and his prior work as an archivist. “I fell in love with things like receipts or shopping lists,” Johnson acknowledged. “It was ephemeral, but I think our lives, our personal histories are made up of the accumulation of junk. When I write I’m trying to bring those things to the surface.… I guess that makes my work restorative.”

Johnson is a graduate of the Cave Canem workshop and a former Stegner Fellow in Poetry at Stanford University. He has received scholarships from the Hurston/Wright Foundation and the Bread Loaf Writers’ Conference.

Johnson teaches at the University of Wisconsin, Madison.