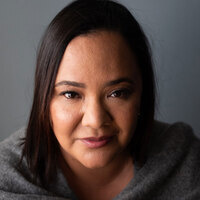 Treasure: From Tragedy to Trans Justice Mapping a Detroit Story

The majority of the victims of hate violence homicides in the United States are transgender women. Transgender people of color are six times more likely to experience physical violence from the police. Shelly “Treasure” Hillard, a young African American transwoman, died violently in 2011. She is one of many, and this is her story. Treasure’s murder isn’t merely a hate crime; on a broader level, it is a travesty that displays the interworking consequences of society's failings: racism, transphobia, the exploitation of sex workers, classism, systematic oppression, government indifference, and the continued criminalization of black bodies.

“Shelly was not a lone body that was scorched. She came from people, many different types of people (queer and trans activists, black trans women surviving and teaching and learning, outreach workers, and FAMILY).” —Janet Mock

dream hampton is an award-winning filmmaker and writer from Detroit. Her works include Lifetime’s Emmy nominated Surviving R. Kelly (2019), which broke ratings records and earned a Peabody Award. hampton was named one of 2019 TIME 100’s most influential people in the world.

Sponsored by the Department of Comparative Race and Ethnic Studies