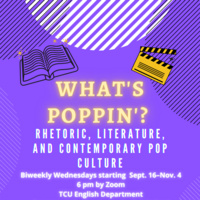 The TCU English Department presents a new series called “What’s Poppin’? Rhetoric, Literature, and Contemporary Pop Culture.” This series is designed to create a space for students to engage with each other and faculty through the intersections of pop culture phenoms and the many facets of literature and rhetorical practice.

Topics for the series range from Game of Thrones to Hamilton to Frankenstein and may feature interactive activities for students such as movie screenings, group discussions, and writing opportunities!

The series will take place every other Wednesday at 6:00 pm via Zoom beginning September 16th and ending on November 4th. Come join us!

Sarcastic, jaded, and a functioning alcoholic: Marvel’s Jessica Jones is a far cry from Captain America, but not from Sam Spade, the private eye protagonist in Dashiell Hammett’s 1930s detective fiction. Join Dr. Wren for a discussion of Jessica Jones not as a superhero, but as a noir private investigator. A female investigator’s agency is often fraught with apprehension: her sexuality, agency, and competency are all sites of anxiety. Jones disrupts conventions and established characteristics of the crime genre and illustrates to viewers the darker side of the female investigator.

Do you enjoy hip hop? Do you enjoy history? If so, you probably LOVE Hamilton. Or, you don’t, and you may want to have a productive discussion as to why that’s the case. Don’t throw away your shot! Join our Gauthier Apprentice Ashley Parks for an in-depth discussion on the fun and finesse of hip hop and history as they exist together in the musical theatre phenomenon Hamilton. We’ll break down some of Lin Manuel Miranda’s lyrical genius and discuss what works, what doesn’t work, why we think the songs are so addictive, and we may even write our own history-inspired raps. You can’t say no to this! Join us!

In Destroyer (2017), Victor Lavalle uses the comic book genre to imagine a sequel to Mary Shelley’s Frankenstein set in a Black Lives Matter context.   When Dr. Josephine Baker, a descendent of Victor Frankenstein, loses her 12-year old son to a police shooting, she brings her son back to life as a robot. Meanwhile, the monster that eluded Victor Frankenstein so many years before is still alive and carries his murderous revenge to the United States. Will Dr. Baker defeat Frankenstein’s monster, or will her grief send her on her own path of destruction? Join Dr. Frey and Dr. Manning for a discussion of this brilliant and timely meditation on despair, race, and the meaning of monstrosity, and its challenge to students to consider how they might update classical texts.

In HBO’s adaptation of Watchmen, Damon Lindelof uses the characters and alternate history of Alan Moore and Dave Gibbons’ original graphic novel to center the racial trauma of the Black Wall Street Massacre. Lindelof brilliantly imagines the ripple effect of this massacre that happened nearly 100 years ago and puts it in conversation with contemporary issues of white nationalism, race, and policing. The miniseries holds a blue radiating mirror to our face to show us how the racial terror of the past animates contemporary life. The weaving of past and present offers us a nuanced understanding of what reparations could mean for Black America. Join Dr. Manning for a discussion on the politics of art, policing, and reparations in this Black Lives Matter moment.

Dr. Manning suggests that participants watch at least the 1st episode of Watchmen on HBO and access the following article in prep for this installment in the series:

While the final season of HBO’s acclaimed TV series Game of Thrones was very unsatisfying for some, for medievalists is was a feast of iconic characters, literary tropes, and familiar storylines. For medieval historians, the final episodes were also very frustrating given the historians’ knowledge of battle tactics and war strategy. Join Dr. Havens as she explores the medieval roots to this popular fantasy series in romances of the Arthurian tradition, the sagas of the Vikings, and real history.  Spoiler alert: Dr. Havens will assume her audience has seen the final season, so there will be spoilers!!!