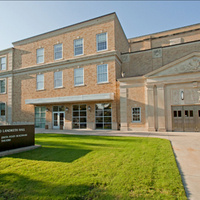 This intimate, 175-seat proscenium theatre opened when Ed Landreth Hall was first opened in 1949. It was originally named The Little Theatre, and was later renamed University Theatre in 1965. In 2005, it was renovated and renamed the Jerita Foley Buschman Theatre, after the patron who gave the leading gift for the renovation project. The Buschman Theatre now features continental seating. The building addition includes the LaLonnie Lehman Lobby, named in honor of TCU's Professor of Costume Design & History, and funded by the Mike & Maryann Atkinson Foundation. The lobby is graced with vintage theatre posters which are a gift from the private collection of Lyle Dye, of North Creek, New York. Since its opening, this theatre has been the primary home for Theatre TCU and has housed more than 250 TCU theatre productions.